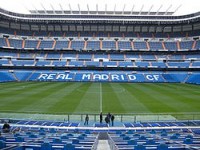 Madrid, is the capital and largest city of Spain. The population of the city is almost 3.2 million and that of the Madrid metropolitan area, around 6.3 million. It is the third-largest city in the European Union, after London and Berlin, and its metropolitan area is the third-largest in the European Union after Paris and London. The city spans a total of 604.3 km2 (233.3 sq mi).

The city is located on the Manzanares River in the centre of both the country and the Community of Madrid (which comprises the city of Madrid, its conurbation and extended suburbs and villages); this community is bordered by the autonomous communities of Castile and León and Castile-La Mancha. As the capital city of Spain, seat of government, and residence of the Spanish monarch, Madrid is also the political, economic and cultural centre of Spain.

Looking for a Room, Cheap Hotel, Lodge or Bed and Breakfast anywhere in Madrid or Spain or Europe or the world?
Please enter your desired location and / or Hotel name in the search box below (dates optional):

Nightlife and young cultural awakening flourished after the death of Franco, especially during the 80s while Madrid’s mayor Enrique Tierno Galván (PSOE) was in office. At this time, the cultural movement called La Movida flourished, and it initially gathered around Plaza del Dos de Mayo. Nowadays, the Malasaña area is known for its alternative scene.

Some of the most popular night destinations include the neighbourhoods of Bilbao, Tribunal, Atocha, Alonso Martínez or Moncloa, together with the Puerta del Sol area (including Ópera and Gran Vía, both adjacent to the popular square) and Huertas (Barrio de las Letras), destinations which are also filled with tourists day and night. The district of Chueca has also become a hot spot in the Madrilenian nightlife, especially for the gay population. Chueca is popularly known as the gay quarter, comparable to The Castro district in San Francisco.

What is also popular is the practice of meeting in parks or streets with friends and drinking alcohol together (this is called botellón, from botella, ‘bottle’), but in recent years, drinking in the street is punished with a fine of €600.

Usually in Madrid people do not go out until later in the evening and do not return home until early in the morning. A typical evening out could start after 12:00 AM and end at 6:30 AM.

The neighbourhood of Malasaña, as well as Antón Martín and Lavapiés, hosts several bohemian cafés/galleries. These cafés are typified with period or retro furniture or furniture found on the street, a colourful, nontraditional atmosphere inside, and usually art displayed each month by a new artist, often for sale. Cafés include the retro café Lolina and bohemian cafés La Ida, La Paca and Café de la Luz in Malasaña, La Piola in Huertas and Café Olmo and Aguardiente in Lavapiés.

In the neighbourhood of Lavapiés, there are also “hidden houses”, which are illegal bars or abandoned spaces where concerts, poetry readings and the famous Spanish botellón (a street party or gathering that is now illegal but rarely stopped).

The Teatro Real is the main opera house in Madrid, located just in front of the Royal Palace, and its resident orchestra is the Madrid Symphony Orchestra. The theatre stages around seventeen opera titles (both own productions and co-productions with other major European opera houses) per year, as well as two or three major ballets and several recitals.

The Teatro de la Zarzuela is mainly devoted to Zarzuela (the Spanish traditional musical theatre genre), as well as operetta and recitals. The resident orchestra of the theatre is the Community of Madrid Orchestra.

The Teatro Monumental is the concert venue of the RTVE Symphony Orchestra.

Other concert venues in Madrid for classical music are the Fundación Joan March and the Auditorio 400, devoted to contemporary music.

Madrid is home to La Liga football club giants Real Madrid, who play their home games at the Santiago Bernabéu. Their supporters are referred to as Madridistas or Merengues (Meringues). Real Madrid is one of the most prestigious football clubs of the world (FIFA selected Real Madrid the best team of the 20th century), having won a record 10 European Cups.

Their successful hometown rivals, Atlético Madrid, are also well-supported in the city. The club has recently won two UEFA Europa League titles and the 2012-13 Copa del Rey, beating their crosstown rivals Real 1-2 at the Santiago Bernabéu in the final, and winning a new league title in 2014. Historically, Atletico has won 10 league titles and 10 Copa del Rey titles. The players (and supporters) are referred to as Colchoneros (The Mattressers), in reference to the team’s red and white jersey colours, which were determined by mattress material being the cheapest at the time of the club’s formation. Atletico play at the Estadio Vicente Calderon.

The city serves as the final stage of the Vuelta a España cycling event.

Find a date, mate, friend, companion or partner at home or abroad in Spain with ExpatDating.com