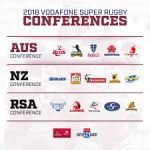 There’s a big weekend of Super Rugby ahead – and it’s an especially big weekend for the South African teams. If you missed any of the action, catch up with all the Super Rugby Result and the latest table here.

Waratahs 51-27 Rebels
The Waratahs walloped a highflying Rebels side when the two sides met in their Super Rugby fixture on Sunday.

The Tahs, who have won just one match this season, ran six tries past their visitors, handing them their first defeat of the season.

Earlier on Saturday, reigning champions Canterbury Crusaders suffered back-to-back losses for the first time in three years after going down 25-17 to Otago Highlanders in Dunedin.

There were also wins for the ACT Brumbies, Western Stormers and Golden Lions, who held off a brave attempt by the Tokyo-based Sunwolves to win on the road the first time since their 2016 debut with a 40-38 win in Johannesburg.

Lions 40-38 Sunwolves
The Lions made hard work of a Sunwolves team they were expected to beat easily when the two sides met in their Super Rugby encounter at Ellis Park on Saturday.

Stormers 37-20 Blues
The Stormers bounced back from a string of disappointing results when they beat the Blues at Newlands on Saturday. It was a good effort from the hosts, who kept the pressure on a potentially tricky Blues side and who had to contend with being knocked down by a virus in the lead up to their match.

Brumbies 24-17 Sharks
The Brumbies held on for a scrappy win over the Sharks in Canberra on Saturday.

Things were tense from the get-go with Wharenui Hawera slotting a penalty in the sixth minute.

Highlanders 25-17 Crusaders
Two late penalties by Lima Sopoaga sealed a dramatic 25-17 victory for the unbeaten Otago Highlanders over the Canterbury Crusaders in a bruising Super Rugby clash in Dunedin on Saturday.

In a frantic finish, the All Blacks’ fly-half, who shifts to England at the end of the season, stepped up after the Crusaders had narrowed the gap to two points with 25 minutes remaining.

Chiefs 41-28 Bulls
The Bulls let a strong position slip against the Chiefs and were beaten 41-28 in their Super Rugby outing on Friday.

Despite leading for much of the match – and controlling much of it – poor discipline and a relentless Chiefs side saw the side from Pretoria suffer their third loss on the trot.