Brumbies 20-25 Jaguares
The Jaguares pulled off another stunning victory in Canberra on Sunday. The men from Buenos Aires shocked the Rebels last weekend and many were wondering if they could bag another away win.

They were on the front foot from the outset with Matias Orlando crossing the line in just the fourth minute and despite a few late tries from the Brumbies, the Jaguares went into the break 13-10 ahead.

Chance Peni’s try in the 67th minute kept the hosts in the game, reducing the gap to three points once more, but any hopes of mounting a comeback were soon quashed when Emiliano Boffelli scored with only 10 minutes left on the clock.

The win sees the Jaguares move above the Stormers on the SA conference.

Sharks 24-17 Stormers
The Sharks and the Stormers’ Super Rugby clash at Kings Park came alive in the second half. At the break, the Stormers were leading 7-3 lead, but neither side really showed any signs of being contenders for the Super Rugby title.

Things changed in the second half, though. The lead was exchanged a few times and, in the end, it was the Sharks came out tops. If you missed the action – you can catch up with how it all went down with the full text of our live blog.

Bulls 28-10 Rebels
The Bulls made it three in a row when they beat the Rebels at Loftus on Saturday. Having led 21-3 at the break, John Mitchell’s men secured another valuable win. Adriaan Strauss, Jesse Kriel, Divan Rossouw and Andre Warner contributed the tries for the home side while Handre Pollard was on point with all his conversions.

Michael Ruru was the sole try-scorer for the Rebels while Jack Debreczeni added a conversion and a penalty.

Reds 12-36 Chiefs
The Queensland Reds had absolutely no chance of reversing their fortunes against the Chiefs after yet another demolition act in Brisbane on Saturday.

After trailing 7-31, Samu Kerevi of the Reds scored his second try of the night but the damage had been done with Tyler Ardon, Charlie Ngatai, Brodie Retallick, Liam Polwart all getting on the scoresheet for the hosts who continued their unbeaten run over their Australian rivals since 2013.

Samisoni Taukei’aho piled on the misery in injury-time and clinched a bonus point for the Chiefs who are now fourth overall on 25 points.

Crusaders 33-11 Sunwolves
The Crusaders needed a bit of a wake-up call but inevitably showed their class as they raced past the Sunwolves in Christchurch on Saturday.

It seemed there could be a possible whitewash on the cards with the hosts galloping to a 14-0 lead within 10 minutes, but the gritty visitors fought back to narrow the gap to just three shortly after the break.

The defending champions restored some order with tries from Ryan Crotty, who had earlier dotted down in the first minute, and Manasa Mataele. Jack Stratton also crossed the line in the 79th minute putting the game to bed.

Michael Little scored the Sunwolves’ only try in the 13th minute with Hayden Parker adding two penalties. The Japan-based side are yet to register a win this season while the ‘Saders have moved up to second on the overall table.

Waratahs 0-29 Lions
The Lions picked up a pretty epic win over the Waratahs in Sydney on Friday. The Tahs could not manage a single point against the high-flying Joburg side.

It wasn’t exactly a free-scoring game – perhaps signified by the narrow 7-0 lead the Lions took into the break. But, in the end, their efforts were enough to secure a bonus point win.

Blues 16-34 Highlanders
The Blues suffered their 15ht straight defeat to a New Zealand side when they were walloped by the Highlanders in Auckland on Friday.

While the Blues were attacking, the Highlanders’ defence remained solid and they took a 20-11 lead into halftime.

By the time the final whistle went, the Highlanders had run five tries past their hosts – securing a valuable bonus-point win.

Dillon Hunt, Kayne Hammington and Shannon Frizell’s hat-trick was enough to help the Highlanders shift to third on the New Zealand conference and fifth overall. The Blues remain bottom of the New Zealand log and 14th overall. 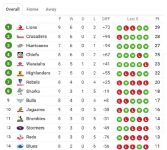