Qantas have got big plans to operate the world’s longest flight from Sydney – but they’ve also got designs on a direct Cape Town route, too.

Cape Town has been identified as one of the five new routes that Qantas Airways want to provide direct flights to. The Mother City has caught the attention of the Aussie aviation outfit, who are also planning non-stop travel to both London and New York from Sydney – potentially providing the world’s longest flight.

In fact, Qantas have laid down the gauntlet for two of the world’s leading aircraft manufacturers: They’ve challenged both Boeing and Airbus to demonstrate why they should get the mega-contract which supplies planes capable of staying in the air for more than 20 hours.

As Bloomberg report, the choice will be between derivatives of Boeing’s 777-8X and the ultra-long-range Airbus 350-900ULR and -1000ULR from its European rival. “Project Sunrise”, as it has been labelled, has been dubbed as a 21st-century space race by Qantas Chief Executive Officer Alan Joyce.

The airline is hoping to get the tender process completed at some point in 2019, before rolling out the flights for the 2022 calendar. But what routes are being planned? Well, one looks set for the Western Cape.

(Destinations in bold highlight “official target routes”. All flight times are based on departures from Sydney)

London, UK: An estimated flight time of 20 hours, 20 minutes.
Paris, France: That would take 19 hours and 45 minutes.
New York, USA: A little quicker, but by no means a stroll, it’d take about 18 hours to fly here from Down Under.
Rio de Janeiro, Brazil: We’re looking at 15 hours, here.
Cape Town: One of our own! The Mother City would be one of the quicker direct flights, taking about 13 hours. 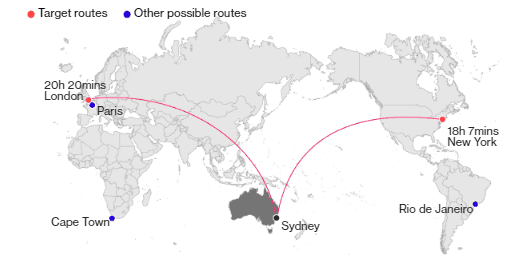 What is currently the world’s longest flight?
The journey from Singapore to New York is currently the longest direct flight you can take. It’s a near 10 000-mile epic that takes 18 hours and 30 minutes to complete. Make sure you’ve got a good book with you on this route. Qantas’ planned routes to London, New York and Paris would all top this number, however.

The longest direct flight you can catch from South Africa would take you to OR Tambo Airport. Delta operate flights from Johannesburg to Atlanta, which accounts for an 8 500 mile trek and takes 17 hours to complete.